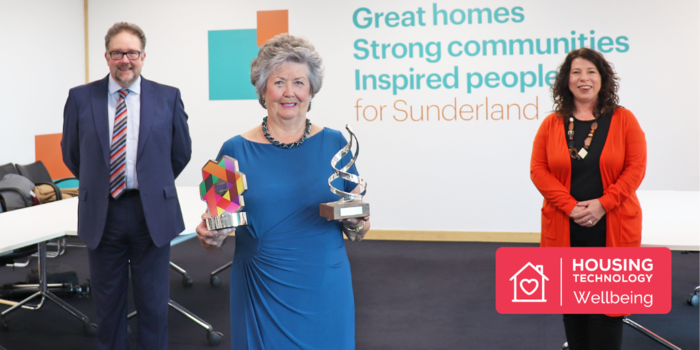 An inspirational resident from Sunderland who became a domestic abuse champion in her local community after she was helped to escape an abusive marriage herself at the age of 74, has won a national award for her efforts as an involved tenant with her social landlord.

Brenda Naisby, from Washington in Sunderland, was crowned ‘Tenant of the Year’ at the Tpas National Awards, for the influential role she has played in helping other residents in Sunderland.

Working alongside her landlord, Gentoo Group -  also the city’s main provider of social housing - Brenda has played an active role i n her local community for more than five years, giving something back to the organisation that supported her and provided her with a home safe from abuse.

Starting with a lunch club in her hometown Brenda, alongside Gentoo employees, prepared homecooked meals in the local community centre for residents to alleviate social isolation. From here she then volunteered as part of the Group’s befriending service, offering a vital lifeline to some of the loneliest people in the city.

Brenda has continued to learn and develop new skills, most recently as the Chair of Gentoo’s Local Community Engagement Forum. The forum, which comprises of local tenants and residents, meet to consider local issues and work with Gentoo to suggest areas where attention could be focused and where services could be improved for the local communities. An avid supporter of continued learning, Brenda has also assisted a number of university undergraduates with their studies around domestic abuse.

Tpas are leading tenant engagement experts who promote, support and champion tenant involvement and empowerment in social housing across England. Their annual awards aim to recognise and celebrate the role residents play in their communities across the UK.

If you have any thoughts, experiences, news or advice on workplace wellbeing that you would like to share, please see our submission page for more information.