How to deal with bullying at work 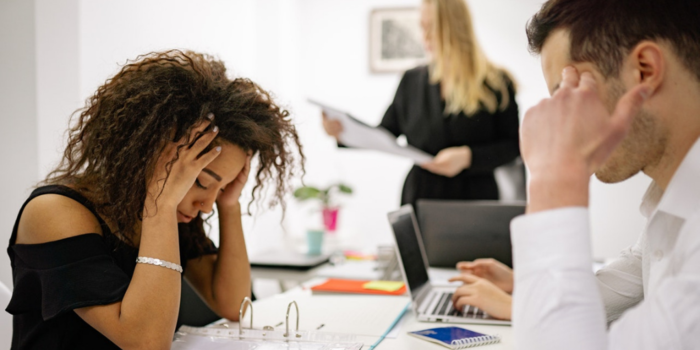 Bullying at work can take shape in many different forms. We expect the perpetrator's actions to be aggressive and in-your-face but in reality workplace bullying is more subtle so harder to spot. Lioness Recruitment's helpful guide will show you how to identify and stop bullying at work and help you get the advice and support you need.

Workplace bullying generally includes acts or verbal comments that could hurt or mentally isolate a person. Bullying can be between two individuals or a group of people. It might be obvious, or it might be more subtle. It can include any kind of abuse or violence whether it’s physical or spoken. It can occur in written communications, by phone or email not just face to face actions.

Recent studies have shown that nearly a third of people are bullied at work in the UK and that many people are too afraid to speak out about it.

Most people’s perception of bullying is that the actions of the bully are overt and clearly identifiable, consisting of the aggressive types of behaviour many of us have either experienced or witnessed in the school playground such as physical assault, name calling or verbal insults.

Workplace bullying, however, tends to be covert in nature and tricky to spot as it can involve subtle emotional and psychological manipulation which is hard to prove and may happen over a prolonged period. The result on the victim may include a dread of going to work, diminished confidence and productivity, heightened feelings of anxiety or other mental health problems which can lead to self-harm and tragically suicide. For businesses it can lead to an increased staff turnover, poor office culture and decreased productivity.

The impact of bullying on the UK economy is estimated to be around £20 billion so it is not only in employees’ interests for organisations to have anti-bullying policies but also for businesses themselves to embrace an anti-bullying culture. It is no longer acceptable for bullying to be viewed as office culture or a management style and that the victims are somehow weaker or over-sensitive. In fact, businesses who fail to act on workplace bullying could potentially see themselves facing legal action.

Although there is no statutory definition, ACAS defines bullying as “offensive, intimidating, malicious or insulting behaviour, an abuse or misuse of power through means that undermine, humiliate, denigrate or injure the recipient”. You are probably being bullied if you are:

If you think you’re being bullied, then talk it through with somebody you trust and get their perspective because what seems like bullying might not be. For example, there might have been a departmental change which has actually caused you an increased workload rather than your boss purposefully adding to it and that’s the reason you’re finding it difficult to cope. Speaking to your manager might solve the problem because they can make some changes to help.

Employers have a 'duty of care' to their employees and this includes dealing with bullying at work. If you're being bullied then you need to seek advice and speak to somebody about how you might deal with the problem informally. This could be an employee representative like a trade union official, Human Resources or your line manager.

Talk to the bully

The bullying may not be intentional as the individual concerned may not realise how their behaviour has been affecting you. If you can, speak to them directly but think about what to say in advance. Describe what's been happening and why you object to it. Remember to stay relaxed and be polite. If you can’t face speaking to them directly then ask somebody else to do it on your behalf.

It’s important to write down details of every incident and keep copies of any relevant documents. It will be very useful if you decide to take action at a later stage.

If you can't solve the problem informally, you should make a formal complaint. To do this, you must follow your employer's grievance procedure.

Sometimes the problem continues even after you've followed your employer's grievance procedure. If nothing is done to put things right, you can think about taking legal action. This may mean going to an employment tribunal. It would be advisable to get professional advice before proceeding along this route.